What Experts Think Of Elon

Elon Musk is a charlatan, not a genius, and possesses no genius or expertise outside of marketing, sales, and pushing propaganda.

In fact, much of what you are led to believe about him is false:

Musk transferred in to Penn from Queens University in Canada – the easy way for admission to an Ivy League – and then took extra time to graduate. No record of him ever being accepted by Stanford, let alone attending AND dropping out, has been produced. His status in terms of Stanford was even challenged in court by one of the REAL founders of Tesla: 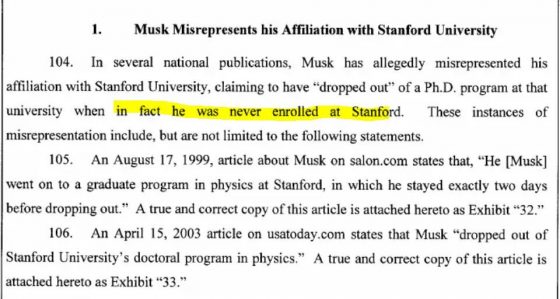 Musk is not a founder of Tesla. He bought his way in then sued for the “co-founder” title. He’s not even legally allowed to call himself the founder, so on any Tesla literature or background, you will see the “co-founder” purchased title. Here is an article detailing this fraud

The most charitable explanation is that Musk sits in the hazard phase of knowledge on every topic. Here’s a great article from December 2018 highlighting that if you have expertise in a topic, you know that Musk does not. It explains that Musk is full of it on the following topics:

Just in 2020, Musk has annoyed experts on Covid and Artificial Intelligence with his misinformation and lack of understanding…

Dr. Lara Jones, an ICU MD, pleaded with Musk on Twitter to “stay in his lane.” It’s not that Musk needs to stay in his lane, it’s that when Musk delves into yours, you realize he’s a charlatan. What she says about his comments on lung capacity are equally true of 90%+ of his claims. Most people just take his word for it when it’s not their wheelhouse